Phoebus Apollo (known in Egyptian as Reshpu and Arabian as Hubal) is the god of the sun, music, poetry and prophecies. He drives the sun chariot, He is the twin brother of Artemis and son of Zeus and Leto, Zeus's immortal girlfriend. He is a very determined god as shown in The Prometheus Affair.

Apollo is one of the most important and complex of the Olympian deities in classical Greek mythology. Apollo has been recognized as a god of light and the sun, truth and prophecy, healing, plague, music, poetry, and more. Apollo is the son of Zeus and Leto, and has a twin sister, huntress Artemis.

In the film, he has a very minor role in which he only appears in minor cameos.

Hercules and the Apollo Mission: In this episode, Hercules wants a better job for Career Day, so Zeus puts Hercules in charge of Apollo's Sun Chariot, which pulls the Sun through the sky. However, the chariot is stolen by Pain and Panic, and Apollo, believing that Hercules lost it, begins to question Zeus' leadership.

Hercules and the Pool Party: Apollo is one of the gods that Hades invites to a pool party in an enchanted pool to makes them forget who they are. Also, Hercules easily rangles Apollo's empty chariot which had been going without its driver. 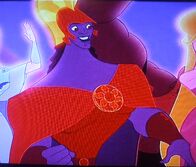 Apollo in the Film 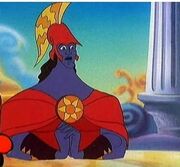 Apollo in Hercules and the Apollo Mission
Community content is available under CC-BY-SA unless otherwise noted.
Advertisement