The goddess of wisdom and witty sister of Ares - her rival. Ares tries frequently to destroy her worship city, Athens, but Athena always receives help from Hercules. She tends to treat her brother Hercules like a child. Athena has a pet owl named Ibid. Though she doesn't get along with Ares, when the two team up, they are a formidable pair. She also has a rivalry with Poseidon. She has a place on the Olympian council and is the daughter of Zeus and Metis.

Athena in the Film

Athena in Hercules and the Apollo Mission 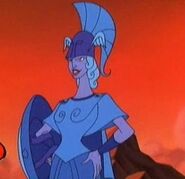 Athena in Hercules and the Secret Weapon
Add a photo to this gallery
Retrieved from "https://disneyshercules.fandom.com/wiki/Athena?oldid=11519"
Community content is available under CC-BY-SA unless otherwise noted.