Demeter (known in Roman as Ceres) is the goddess of agriculture. She is the sister of Hera, Hestia, Zeus, Poseidon, and Hades. Summons Nemesis to smite the satyr Pan for his inadequate offerings at her harvest festival and building a temple to himself. He doesn't get smitten in the end only because he pays back the offerings and dedicates his temple to Demeter. Her biggest appearance is in "King for a Day". She is one of the gods who searches for Prometheus and the traitor who set him free. Persephone is her's and Zeus's daughter. One day Persephone was picking flowers when Hades saw her and decided that she was his true love. She is in the episode "Hercules and the King for a Day" and a minor character in the film 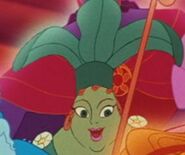 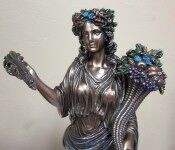 statue of the god Demeter
Community content is available under CC-BY-SA unless otherwise noted.
Advertisement