Hades (known in Roman mythology as Pluto) is the God of the Underworld. He is a male antagonist in both the series and the film. He is a younger brother to Zeus and Poseidon, and constantly tries to overthrow Olympus. He hates his nephew. Hades has two imp-like minions, Pain and Panic. Hades is smooth-talking, and often tricks people close to Hercules into doing things for him. He even once conspired with Jafar. He is the brother of Zeus and Poseidon. The only time he is allowed on Olympus is during the Winter Solstice, as a part of the Council of the Gods and son of Cronus and Rhea

In Greek Mythology, Hades is the god of the Underworld (kinda like Chaor from Chaotic), or Tartarus. He is not really a villain. In fact, Ares is more disliked than Hades. Hades is viewed as the unlucky brother of Zeus and Poseidon. The only time he could be seen as the bad guy is when he kidnapped Demeter's daughter, Persephone, because he fell in love with her when he saw how bright, chee rful, and sweet she was, and made her his wife. She wanted to return to her mother who was frantically searching for her everywhere on Earth. As a result, Persephone would not eat and Demeter refused to let anything grow until Zeus made Hades return her daughter. Hades said tsuck my ntdyrfsjtrdtjrsweaw4ADhat if Persephone had not eaten anyth ing, than she could go to the world above. But if she had, then she must stay in the Underworld with him as his  wife. Meanwhile, Persephone had succumbed to temptation and ate six pomegranate seeds. Zeus proclaimed that for six months, she would stay in the Underworld with Hades while the world was cold and dark, but for the other six she could rejoin her mother, who in joy would allow things to grow in the warmth of the sun, thus creating the seasons. 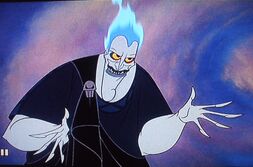 Ugly girl in the Film
Add a photo to this gallery
Retrieved from "https://disneyshercules.fandom.com/wiki/Hades?oldid=11816"
Community content is available under CC-BY-SA unless otherwise noted.