Hera (know in Roman as Juno) Is Zeus' wife and Hercules' mother. She is the sister of Demeter, Hestia, Poseidon and Hades as well as her husband Zeus and daughter of Rhea and Cronus and Mother of. Hebe and Nemesis and Ares and. Hephaestus stepmother of Apollo and Artemis and Athena and Helen and Hermes and Persephone and Bacchus and Hercules and Aphrodite

In the original myth, Hera (A) was not Herc's mother, and (B) hated him. A lot. (this sentiment was amongst all demigods, especially those fathered by Zeus) and goddess of family, motherhood,women  and childbirth and marriage

As a Goddess, Hera possesses 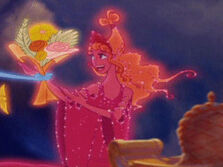 Hera in the Film 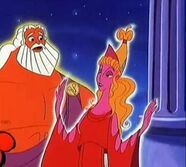 Hera in Hercules and the Apollo Mission 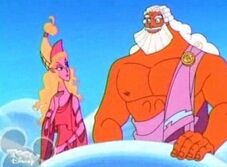 Retrieved from "https://disneyshercules.fandom.com/wiki/Hera?oldid=11279"
Community content is available under CC-BY-SA unless otherwise noted.