Start a Wiki
This article is about the video tie-in to Hercules: The Animated Series. You may be looking for the song from the original movie, "Zero to Hero". 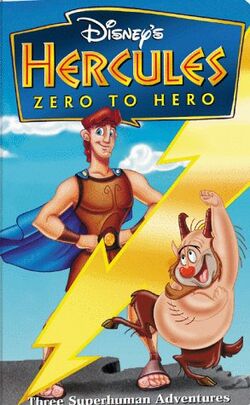 Hercules: Zero to Hero is a direct-to-video movie that combines three episodes from Hercules: The Animated Series with some new segments and dialogue to present a brief history of Hercules' training at Prometheus Academy. It was released on August 17, 1999, a half year after the series ended.

After having defeated Hades for good, Hercules and Megara have married and moved into a new home. A delivery of old high school items arrives, but Hercules has it sent back to Phil because he's embarrassed by that period of his life. Meg finds Herc's yearbook (scroll) and wants to learn more, so she seeks out Phil to get the full story.

The framework of the movie is similar to the episode "Hercules and the Yearbook", but the conversation between Hercules and Meg was changed to fit the three episodes:

At present, the film is only available on VHS and has not been released on DVD or any on-demand service.

Retrieved from "https://disneyshercules.fandom.com/wiki/Hercules:_Zero_to_Hero?oldid=11104"
Community content is available under CC-BY-SA unless otherwise noted.