In the 1997 film, Disney's Hercules, Narcissus is considered a God. However, in actual Greek mythology, Narcissus was only a very handsome man. Due to not loving a nymph (nature spirit) named Echo, Narcissus was forced to look at and fall in love with a reflection of himself. He could not look away, so eventually he died. The Olympian Gods took pity on him and turned Narcissus into a flower known as the "Narcissus". Shortly after, beautiful yellow flowers began to bloom, signifying the man who lost his life.

In the film, Narcissus is pictured as the God of Vanity. He is portrayed as an Olympian God with white hair and purple skin. He has a red medallion with the word "me" on it in white lettering, alluding to his obsession with himself. He has shining white teeth, 11 spiral chest hairs, and wears a navy blue toga. He also holds a dark purple mirror in which he appreciates his looks. In the Hercules television series, Narcissus has the same personality, (and chest hairs) but his medallion is now orange with yellow lettering, and his mirror is a yellowish-gold color. 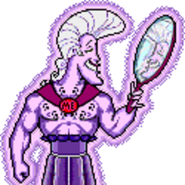 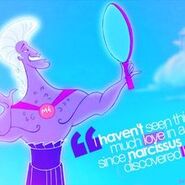 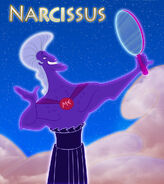 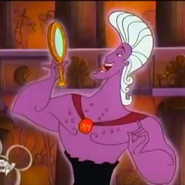 Add a photo to this gallery
Retrieved from "https://disneyshercules.fandom.com/wiki/Narcissus?oldid=11726"
Community content is available under CC-BY-SA unless otherwise noted.