Poseidon (known in Roman Neptune) is the god of seas and is the brother of Zeus, Hades, Hera, Demeter and Hestia, and son of Rhea and Cronus.

Poseidon is present at the party announcing Hercules' birth and when Hercules achieves godhood. Though not shown, he was amongst those captured during the Battle for Mt. Olympus.

In the episode "Hercules and the River Styx", Poseidon is visited by his brother Hades who wants to trick him into using his powers to move the River Styx (which is part of Hades' domain) into Greece (which is part of Zeus' domain). This will instead turn Greece into part of Hades domain and therefore make him ruler of Olympus. He then tricks Poseidon by telling him that when he becomes ruler he will give Poseidon the city of Athens. He has a rivalry with Athena because they both wanted to be the Patron God of Athens.

He is the father of Triton, husband of Amphitrite and uncle to Hercules. He has a big appearance in "Hercules and the Poseidon's Cup Adventure" and "Hercules and the The Son of Poseidon". His weapon is a trident. Being the Sea God, he can control water. He is also the Earthshaker so he can cause earthquakes.

Poseidon in the Film 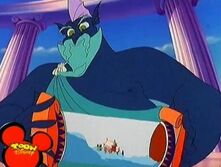 Poseidon in "Hercules and the Apollo Mission".
Community content is available under CC-BY-SA unless otherwise noted.
Advertisement