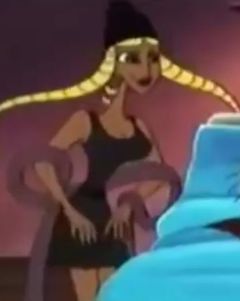 The Valkyries are goddesses of life and death, battle and magic. They take warrior souls to Valhalla. They appeared in the episode "Hercules and the Twilight of the Gods" of Hercules: The Animated Series.

In Norse mythology it was said to believe  that the aurora borealis in displayed in the night sky to believe to be the Valkyries 's refreshes from the shield the Valkyries were said to the the a servant to God Odin.

Brunhilde (Leader of the Valkyries)

Retrieved from "https://disneyshercules.fandom.com/wiki/The_Valkyries?oldid=11152"
Community content is available under CC-BY-SA unless otherwise noted.