Zeus (known in Roman as Jupiter) is the king of the Olympian Gods and is father to many of the gods and brother to Poseidon, Hades, Hera, Demeter and Hestia. He is also the father of the legendary hero Hercules. He tells his son Hercules that to join the gods, he must become a hero, which he defines as something more than being famous. Zeus is betrayed by Hades, but Hercules later saves him and Olympus, and Zeus reveals that for willingly giving his life to save Meg, he is finally a true hero and can be a god. Nonetheless, he is supportive of his son's decision to remain with Meg. Son of Rhea and Cronus and father of Hercules, Hebe, Nemesis, Helen, Aphrodite, Ares, Hephaestus, Bacchus, Persephone, The Muses, Hecate, Athena, Apollo and Artemis.

Many eons ago, Zeus imprisoned the deadly Titans, who threatened to destroy the world, deep beneath the ocean where they would remain for the rest of eternity undisturbed. However he was unaware that the next planetary alignment would reveal the location of the Titans prison.

Zeus is the jolly, stubborn type. He Is married to Hera, who in the real myth, hates Heracles, also known as Hercules. He is extremely angry when Heracles gets stolen by Pain and Panic, Hades's imps. 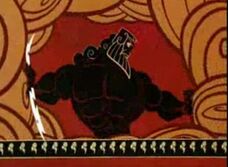 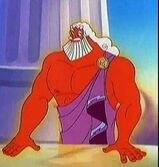